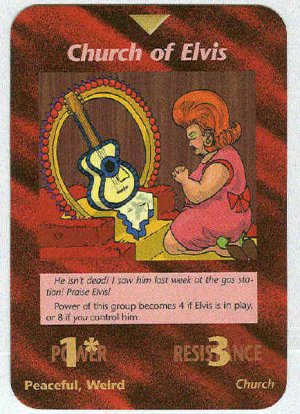 That’s why the funnest part of an Illuminati game is recounting the true facts behind each card, telling  absurd, kind-of-fact-based stories about the hidden links that connect our world.

You play the Church of Elvis card and discuss  the giant Elvis statue in Neve Ilan, right outside Jerusalem. Yes, really. You knew Elvis was Jewish, didn’t you?

The Visa network remains impregnable to subversion by its enemies because it is fully distributed and no one knows who controls it. But that did not stop our Dee from making his megabucks (the currency in the Illluminati  game), and retiring early to a Dr-No-ish sea-front estate where he could dream up sophomoric world-changing  philosophies. Unlike ordinary sophomores, however, he had a billion dollars to help him spread his ideology. He called it  “Chaordianism.” It’s not quite clear what “Chaordianism” means, something about mixing up chaos and order; but don’t  confuse it with  Discordianism, the prankster religion responsible for spreading the Illuminatus! Trilogy  and a major inspiration for the Illuminati game.

Chaordianism spread and took  over a number of organizations, including the  4-H farm youth club–not exactly the Boy Sprouts, but close enough.

After a while, the founder got bored and wandered off to play golf, and that’s when things got interesting.  The organization schismed, and a small clique of  breakaway  Chaordians worked their way into the leadership of La Leche League, the breastfeeding group, with the aid of a generous
donation from an unknown source. In true conspiratorial form, they didn’t call it Chaordianism. They called it the  Renewal Initiative.

In the Illuminati game, one secretive organization controls another, establishing covert chains of control, well-hedged with deniability. Sometimes these tenuous links are neutralized; sometime one Illuminatus  battles another to seize control of a group; sometimes one of the groups is destroyed; all part of the fun!

No one at LLL  knew what the Renewal Initiative’s philosophy was, but whatever it was, it  involved dismantling everything LLL stood for. No longer would a counselor need experience  in breast-feeding: Bottlefeeding would do;  they’d even take non-mothers; even men.  Counselors and leaders who spoke out against RI were purged with a late-night international phone call  telling them that they had been “disaccredited.” Some now-ex leaders formed a  splinter group called Breastfeeding USA–those who joined it were tracked down and expunged from LLL.

Things got so  bad that the Founding Mothers, a shadowy group of otiose figures of power from the distant past, threatened to step in. They had the right by the LLL charter to join the board of  directors at will. At last,  hope that the League would be saved! But the Renewal Initiative leaders (whoever they are; no one knows) quickly rewrote the bylaws to allow an extension of the  board meeting schedule. They then deferred the next meeting just enough that a few of the aged Founding Mothers might die first; and just enough died so that they could not carry the vote.

All appeared lost. But suddenly a lawsuit resulted in a settlement that removed the RI conspirators. Kind of an anticlimactic  way to end the game, don’t you think? Like right in the middle of a game, your friend  announces that  he has to leave, and so you wrap it up  without really finishing. What happened? What were the details of the lawsuit? As one may expect from a proper war between enigmatic conspiracies, the  settlement remains sealed and protected by watertight NDAs, and so we’ll never know. 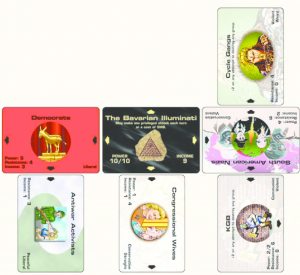